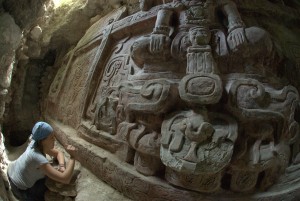 Archaeologist Any Shetler during the discovery of the frieze 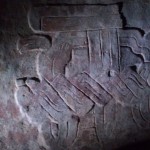 emblem on south side of Building A 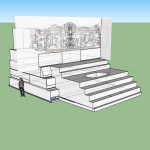 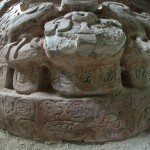 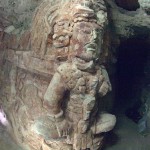 Figure on the south corner 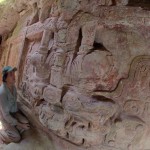 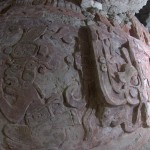 tomb located along the stairway leading to the frieze 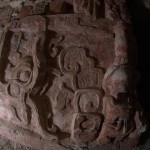 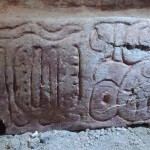 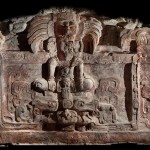 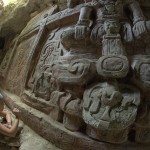 GUATEMALA CITY— A Maya pyramid beautifully decorated with a rare polychrome- painted stucco frieze was unearthed in July 2013 at the site of Holmul, a Classic Maya city in northeastern Peten region of Guatemala.  The find came as archaeologist Francisco Estrada-Belli’s team excavated in a tunnel left open by looters.  The stucco relief stands along the exterior of a multi-roomed rectangular building, measuring 8m in length and 2m in height. Much of the building still remains encased under the rubble of a later 20m-high structure. The carving is painted in red, with details in blue, green and yellow.

“This is a unique find. It is a beautiful work of art and it tells us so much about the function and meaning of the building, which was what we were looking for,” says Estrada-Belli. The carving depicts human figures in a mythological setting, suggesting these may be deified rulers.  The team had hoped to find clues to the function of this building, since the unearthing of an undisturbed tomb last year.  The burial contained an individual accompanied by 28 ceramic vessels and a wooden funerary mask.

An inscription below the figures tells us that this edifice was commissioned by the ruler of Naranjo, a powerful kingdom to the south of Holmul. In the dedication, king “Ajwosaj Chan K’inich” claims to have restored the local ruling line and patron deities. The images and glyphic text on the frieze also provide information about political actors in the Maya Lowlands well beyond this small kingdom.   “One of the glyphs describes Ajwosaj as ‘vassal of the Kanul king,’ suggesting a much wider network of influences was being felt at Holmul. When this building was erected, Kanul kings were already on their way to controlling much of the lowlands, except Tikal of course,” added Estrada-Belli.

The text places the building in the decade of the 590s, according to Alex Tokovinine, a Harvard University Maya epigrapher associated with the project. who has deciphered the text. “Ajwosaj was one of the greatest rulers of Naranjo. The new inscription provides the first glimpse of the remarkable extent of Ajwosaj’s political and religious authority. It also reveals how a new order was literally imprinted on a broader landscape of local gods and ancestors,” says Tokovinine.

During the Early Classic period (A.D. 300-550) the Tikal kings had established new dynasties and far-reaching alliances with kingdoms throughout the Maya Lowlands, perhaps thanks to a connection with Mesoamerica’s greatest state, Teotihuacan.  Tikal suffered a defeat in the year 562 by the Kanul “Snake” kingdom, which, for the following 180 years, would come to dominate most other Lowland kingdoms.  An inscription at Naranjo indicates that Kanul king K’altuun Hix had overseen the accession of Ajwosaj, as early as the year 545.

The relief depicts three human figures wearing elaborate bird headdresses and jade jewels seated cross-legged over the head of a mountain spirit known as a witz (“mountain”). A cartouche on the headdress contains glyphs identifying each individual by name. The central figure’s name is the only readable one: Och Chan Yopaat, meaning “The Storm God enters the sky.” Two feathered serpents emerge from the mountain spirit below the main character and form an arch with their bodies. Under each of them is a seated figure of an aged god holding a sign that reads “First tamale.” In front of the serpents’ mouths are the two additional human figures, also seated on mountain spirit heads. 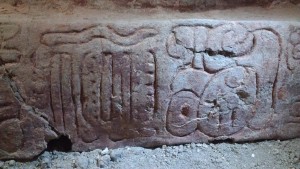 A band of about 30 incised glyphs adorns the bottom of the frieze. The legible parts mention K’inich Tajal Chaak, a local ruler, a series of predecessors, his parents and his grandfather, Naranjo’s king Ajwosaj, noting his (Tajal’s) subordination to the Kaan Kingdom. This statement opens a pandora’s box on the relationships of kingdoms around Tikal at a time in which Tikal had just suffered a defeat from Kaan.

The tomb associated with the building was found in a cavity dug into the stairway leading up to the building.  The skeleton of an adult male and his ceramic offering were preserved by large limestone slabs that kept the tomb free of debris.  His incisor and canine teeth has been drilled and filled with jade beads.  The decayed remains of a wooden mask, perhaps originally worn as a pectoral, were found on his chest.  With it were two miniature flower-shaped ear spools. 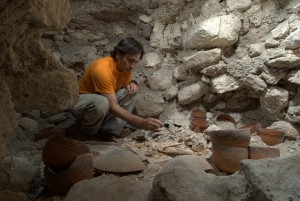 The number of vessels in the tomb as well as their iconography bore clear references to the nine lords of the underworld as well as to the aged sun god of the underworld.  There were two sets of nine polychrome-painted bowls decorated with the water lily motif, each made by a different artist.  There were also nine red-painted plates and one spouted tripod plate decorated with the image of the god of the underworld emerging from a shell.  Because of the unusually high number of vessels and the jade dental decorations, Estrada-Belli believes this individual may have been a member of the ruling class at Holmul, possibly even one of the rulers depicted in the frieze; he had planned this year’s excavation to search for more clues about the man and the period in which he had lived.

The team hopes to return to the area in 2014 to continue exploring and to preserve this building. This year’s investigation was endorsed by Guatemala’s Ministry of Culture with funding from Guatemala’s PACUNAM foundation, the US Department of the Interior, Global Heritage Fund and the U.S.-based Alphawood Foundation with additional support from Boston University, National Geographic Society/Waitt Grants Program, and private donors.